Word Prediction in your Pocket... 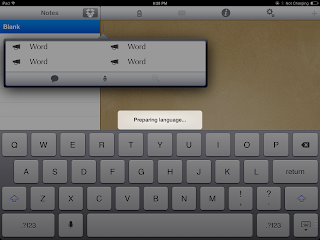 Hey Tek-Ninjas, I think I have a new favorite app! Again.

Typ-O HD is delivering what software writers said was impossible just a few years ago. Word prediction, including phonetic spelling for iDevices. 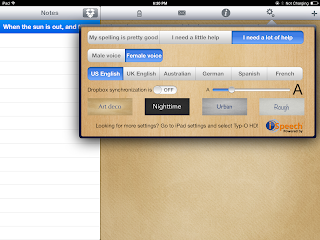 The interface is elegant and very simple to use. Begin typing and word choices appear in a box. Touch the mega-phone icon and the word is read aloud. Touch the word and it inserts at the cursor.

Touch the "Settings" icon on the top right of the bar, and tailor your app based on your spelling profile, choose a male or female voice, sync to your Dropbox account, or alter the decor. 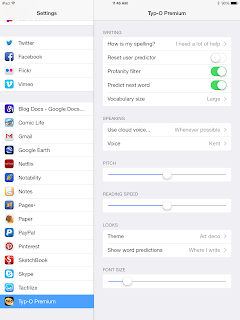 If you need more adaptations, go to Settings for your iPad and make additional changes there.  You can alter the pitch of the voice as well as the reading speed. You can also filter profanity, font size, and choose vocabulary size.

The folks at SecondGuess apps boast for this app they have collected and analyzed roughly 100,000,00 words of text. That is astonishing, and probably one reasons the app works so well. 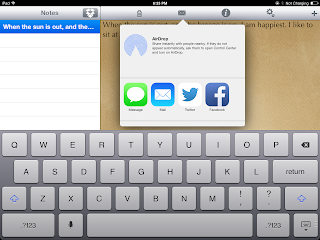 When your done writing you can choose from multiple ways to share your document. Options include Apple's new Airdrop, or sending via a Message or email. In addition, you can post straight to Twitter or Facebook. This last function really demonstrates the app writer's understanding of how to resonate with young writers!  I also found that I could simply copy and paste text into other apps if I wanted, such as Comic Life.

Another feature that takes advantage of the iPad is the ability to change font size by pinching or "un-pinching" the text. Really neat quick way to adjust sizing.

In addition to offering really powerful word prediction, the app integrates voice dictation that works as well as anything else out there.

The app sells for $14.99, which for an app may seem step at first glance. But, consider that most other word prediction software with phonetic spelling rarely sells for less than several hundred dollars, and does not run on iDevices, Typ-O HD is a bargain!

One last thought... The folks at SecondGuess offer a $4.99 version of Typ-O also, and the difference is that the less expensive version has a lower quality voice. This may not seem that significant, but the quality voice is really remarkably good, and as you likely know digital voices can be difficult to listen to, especially for our youngsters on the spectrum.