Hey Tek-ninjas! Today I want blog about how a concept designed to support "lazy" has morphed into universal design (UD) AND access.

Some of you may not even remember a time when you had to get up off the couch to change a tv channel. I do. No, not because I'm THAT old, but we did not get a tv until I was a teen, and then it was a very cheap model. Momma-T was a bit of a granola hippy, and was convinced tv would rot our brains! We certainly did not have a remote control on that black and white box. Did you know that it's been almost 65 years since infrared remote controls came to market? These little gadgets were called "Lazy Bones" and allowed us to stay on the couch (so as not to lose a prime seat). Staying on the couch allowed you to dictate what you watched at least until your bigger brother or sister exercised their might. Sigh. 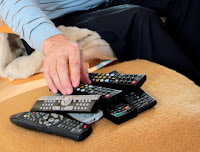 One inherent problem with infrared remote controls was that they got lost. When we finally got one, my father drilled a hole in it, tied a bit of rope, and secured it to the side table. Rhet did NOT play. Then we started needing even more remotes for the cable service, and tv, and speakers, etc.

Flash forward to today, and you find that most if not all modern televisions and tv services do not come with an infrared remote, but rather a radio-frequency remote. RF, also known as “radio frequency,” and IR, which stands for “Infrared,” are two kinds of energy used in remote controls to send commands. RF uses radio waves and IR is a kind of light that.

Additionally, with web-enabled technology, there are so many alternative user interfaces (UI) available now which use voice controls. And this is not just for our tv's anymore. We can connect to the home thermostat, lights, doors, etc.

In my home any of us can say "Hey Google, play the Grateful Dead on Spotify" (I'm the only one who asks for the Dead though), or "Hey Google, turn on my office lights". As long as I'm within "hearing" of the speaker UI - those commands are carried out for me. OR, I can open the app on my iPhone (Android too) and control all of this. It's pretty Amazing.

These web-enabled environmental controls are very accessible, and available at local stores or online. They are relatively affordable, and easy to setup. You don't need a specialist to automate much of your household. This access to universal designed access can be of profound importance to many of our folks who utilize communication systems. Leveraging Siri, Alexa, Google, and other smart speakers, users can control so many aspects of their environment. Especially eye-gaze or switch access.
Historically AAC software and AAC hardware came with IR built in to it. Tobii Dynavox still offers IR on most of their DME. But more recently, folks have begun ignoring the IR, and leveraging their AAC systems to speak to their smart speakers. All without having to be in "line of sight". 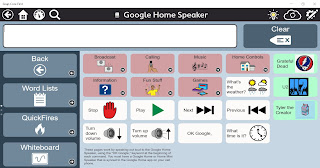 Some folks may have already invested in Alexa or Siri in their home. If that's the case, that's fine. Those pagesets are built in and ready - go ahead and use them. BUT... if you've not, and are considering a smart speaker - I endorse Google because Tobii Dynavox and Google worked together to integrate Hey Google commands over the wifi to the smart speaker system. This means the user is no longer tethered to being close enough for the speaker to hear you. This is huge. Awhile back I blogged about the integration of Hey Google into Snap Core First AAC software from Tobii Dynavox.

Access to such technology obviously increases an individual's independence. It allows them to do so much. And for young emergent communicators, it can be a terrific motivator to practice using eye-gaze.

So, I'm unsure that infrared is actually "going away", but I am confident and excited that there are new and more robust user interfaces available which can greatly increase the quality of life for many of our AAC users!