Tek-Ninjas, if you've been reading my blog for awhile, you may remember this article I wrote a few years ago.

In the article I wrote about a conversation I had with a sales rep for a prominent education software company.  I had (and still do have) a lot of respect for the fellow, but I thought he was way off base on his opinion here.

Turns out, I was correct. Yes. this is one of those "I told you so" moments!


He had posited that his company would NEVER make an app for the iPad, suggesting that the devices were essentially toys, without sufficient computing power to do their programs justice. 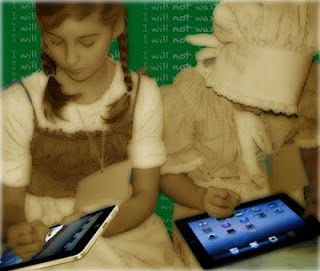 Well, several months ago his company released an iPad version of their prize software. I'm not gonna share who and what it is, because I don't want this conversation to reflect poorly on them.  I will say it's a really fine app that achieves everything the desktop version does.  I will add that with increased portability (intrinsic to the iPad of course), a more intuitive interface, and a fraction of the price the iPad version is a superior product.

To be fair, when we first had this debate, the iPads were new, and they did not have the processing power they now offer. It was a different beast. I'm pleased to see they have come around and created such a fine app.

One of his big concerns was that teachers/therapists/and parents would use the iPad much like the t.v. has been used on some occassions, replacing meaningful interaction with a "babysitting" device. This was for me a cautionary notion.


I still maintain, that the efficacy of any software whether on an iPad or laptop/desktop increases significantly with oversight from an educator, or therapist.

This oversight means someone will apply educational/clinical reasoning to guide the process. Someone who will draw out the teaching moments, highlight successes, illuminate issues in order to correct them, tailoring the experience to the user.

So, my take home notions here? One: as iPads continue to become more powerful devices, expect to see even more powerful software solutions becoming available (COOL!), and two: continue to be vigilant of your practice... be mindful of any intervention you utilize so that the interventions purposfully bring you closer to your client/student's goals.

Happy Therapy!
Posted by Tek-Ninja at 9:33 AM