The iPad: the single worst thing to happen to the field of Assistive Technology


"He said not only was his company not going to be making Apps, but in [his] mind the iPad was the single worst thing to happen to the field of assistive technology in twenty years”


So for the record, let me state that I think Apple’s are probably the single most exciting and innovative technology education since I’ve been in the field. The impact on the assistive technology field are already hugely positive. They allow us to replace pre-existing technologies at a fraction of the cost. New applications seem to come out every day. The interface is so easy and intuitive to use that the most techno-phobic teachers and therapists readily embrace .
I am unabashedly a fan of the iPad. I see it as (forgive the cliché) a GAME CHANGER in education as well as Assistive Technology. an understatement to say I was astonished by Bob’s assessment. I told him as much, but because I know that he’s an intelligent man I asked him to expand on his opinion Bob stated that the applications being built for the iPad do nothing to address literacy. Again, the company which Bob works for software expressly to facilitate the acquisition of literacy skills. He did acknowledge that some of the applications being written are useful in helping with other skills (drilling math, and to some degree communication).
I believe he is mistaken in saying that there are no applications made to support literacy. I can think of many great applications out there, some overtly supporting literacy skills like , Super Why, Build A Word, and the many Pearson Apps. Less didactic apps include two of my favorites, Toontastic, and Comic Life. Apps supporting other aspects of learning and living many, too many to list in this post.

Bob’s biggest issue with the iPad was not this alleged lack of literacy support. What Bob dislikes about the is what he referred to as our blind love affair with them. He posits that educators and therapists will use to teach in the same way some parents raise their children with the TV set, hands-off, and giving over our teaching/therapy power. Bob asserts that critical thinking and instruction are vulnerable to the “magic factor”.

I believe that this is an interesting theory, and not to be ignored. How do we make certain the is well integrated into our teaching/therapy, and not give away our Clinical or Educational reasoning?
In the public school system the students that my team serve almost all have Individual Education Programs (IEP). An IEP consists of goals a teacher or therapist is working on with a student to facilitate that student accessing his/her curriculum. Such an IEP should be geared to bringing the student as close to the Standard Course of Study as possible. A goal may read as follows: “Johnny will write a 3-4 sentence paragraph with appropriate letter formation, and correct spelling and grammar”. The goal is for Johnny to write a functional paragraph. How Johnny accomplishes it is the intervention. The intervention may be an iPad, computer, portable word processor; expanded keyboard, special software, and so on. The goal should not be, “Johnny will use an iPad to write a paragraph”. Upon Johnny’s graduation, no one will be concerned whether or not Johnny can write with an iPad. What they will ask, is can he write functionally (with no concern what writing tool he uses).

The IEP serves as the road map for a student’s educational journey. Such a road map is useful whenever teaching, no matter the teaching modality. Before deciding to use , other questions should be asked, such as: what is the student trying to accomplish? What will determine success? How do we measure our progress? , we ask, what tools may help us on our journey? Perhaps the answer is an iPad. Perhaps it is another tool such as word-prediction software, or a simple word bank. Put the student’s goals before the technology and it’s hard to go wrong! 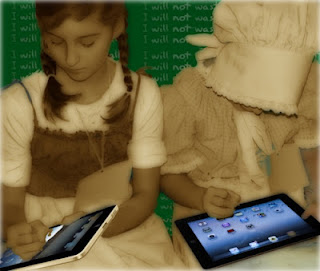 And so, Bob raises a good conversation point. The are new and seductive. Everyone wants to use them, including our most reluctant learners. A few folks may even allow their educational goals to take a back seat to the glitz. However, if we practice as mindful educators and therapists, I am confident that we will be able to harness this exciting new technology to promote growth in our students.

Once upon a time, students wrote with chalk on slate boards. Over time, students were introduced to pencils, pens and paper. Ironically, there was resistance to such "technological advances" even then. Chalk was messy, and was sure to ruin books, desks, and student clothing.  But, old technology gives way to new technology. I predict that within the next five years or similar products will have infiltrated most all of our schools with a one to one ratio. They will be instrumental in how we teach. Some of the novelty will wear off, and they will simply be the tools students learn with.

Furthermore, despite his assertion otherwise, I expect Bob’s company will either get on board, or be left far behind.
Posted by Tek-Ninja at 10:38 PM