Touchy feely with the TacScreen.

Hey Tek-Ninjas! Today I want to share with you an accessory a colleague told me about. The TacScreen is a clear lightly textured polymer that adheres to the glass of iPad. It is designed to provide increased tactile feedback over the smooth glass, and is sold specifically for various sized iPads. Likely it would work as well for Android or Windows tablets. Pricing ranges from $17.95 to $19.95, with a price-break for buying multiples.

The idea of learning through multi-sensory modalities is held in many teaching programs including Handwriting Without Tears, and Orton-Gillingham.  On the surface, the idea makes good sense to me.  I was very curious to see what a few specific folks I work with would think about this product.

I asked my coworker, J, an Occupational Therapist who works specifically with pre-k students who present with a wide variety of issues.

J felt that the TacScreen was a nice additional tactile component to technology, and that her students did not mind it being on (some asked what it was, some didn't seem to notice).  She did comment that the TacScreen makes the screen less clear for some apps, specifically for watching any video. The screen may need to be cut down to work with cases.  J also said that at times she felt like squinting in highly visual apps, however none of her students had this issue.  Finally, J thought it "would be best on an iPad just being used for teaching letter formation or drawing."

Next I sent the TacScreen to a student I used to work with, and her boyfriend. A. is 17, Visually Impaired / Legally blind, with some functional vision. B. is 20, Blind / no vision or light perception.

I would like to add, the folks at TacScreen NEVER stated that this tool was designed with visually impaired users in mind so I acknowledge that I may have went looking for trouble with this "test".

B. was less enchanted saying "It doesn't help or hinder me".

They both noted that it's possible to do something similar and put Braille letters on the screen where the keyboard pops up, but that it can be tricky to learn keyboarding with Braille, so it would also be useful for people to have extra input/practice.

Finally, I used the TacScreen for a while in my day-to-day practice, as well as to make artwork using photoshop. 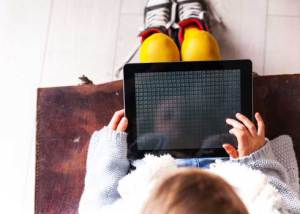 I very much like the tactile feedback. I am an avid user of my iPad, but have always been a little dissatisfied with the slick feel of the glass. This feedback reminds me of the comforting scratching of a sharp pencil on paper. I had no issues with clarity of the screen.  Students that I introduced it to remarked on it's feel, and all indicated that they liked it.

The company notes that the screen is not designed to be taken on and off, as it will lose it's adhesiveness after a few times. So, once installed, it's best to leave it on.

If as a user, you dislike the slickness of the glass (like me) this is a great option, not terribly pricey, and incidentally, while not the intention, offers one more layer of screen protection.

I tend to agree with J, in her assessment that the TacScreen would shine when being used to instruct in letter formation. If you are engaged in teaching letter formation, as well as drawing this tool may make a significant difference for your students.

If you already are using it, I'd love to hear your feedback!