Well, one more for the day... Guess I'm on fire Tek-ninjas!
Our fearless United States Secretary of Education, Arne Duncan writes a blog about education. It is often interesting, and mostly infuriating to me, as I don't see Mr. Duncan as a supporter of education, and so I am not a fan.  Ironic, I know, given his office.
Recently he posted to his blog "A Back to School Conversation with Teachers and School Leaders.  In this article he writes that:
"There are three main issues [he's] heard about repeatedly from educators: 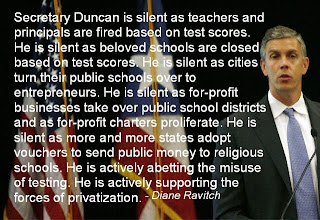 If you've followed much of his work, this all is an about-face for him. It does not fit with what seems to be his agenda to support high-stakes testing, and (the real cynic in me thinks) dismantle public education.

But don't take my word for it, head over there, read it yourself, and leave him a comment.
I left a comment, and so far, the FBI has not visited me.