Tell Me Something Good!

One of my most significant "take aways" from the WATI (Wisconsin Assistive Technology Institute) conference I recently attended was an introduction to the iPad and Android app Avaz for Autism.

According to the company, Avaz is "a research-based AAC app, specially developed for children with autism. Avaz was designed in collaboration with hundreds of experts: parents, speech therapists and children."

I would add that Avaz could work well for any user struggling with communication and needing an alternative voice. 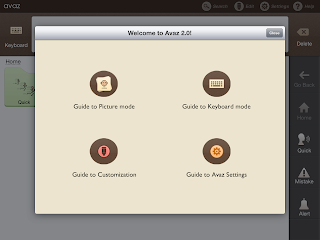 This review will look at the iPad version, as I have little to no experience with the Android OS.

Let me begin by saying how pleased I was with the intuitive layout, and ease of use. Avaz is ready to work and play immediately.

When you first open up the app you are presented with very simple tutorials that are more than sufficient to get you started using the app.  Or you can by-pass the tutorials and plunge right in. 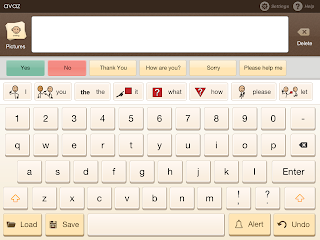 Avaz for Autism very easily alternates from a keyboard to picture symbols. There is a word prediction bar that works well with the keyboard, and the keyboard can be QWERTY or ABC.

If the user has a common phrase, tapping the "Save" key on the bottom left makes it readily available anytime with the tapping of the "Load" key.

Also of interest is the "Alert" key on the bottom right which makes a doorbell sound to alert folks that the user has something to say.  That is a simple feature, yet so fantastic! 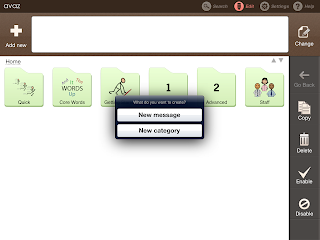 Picture symbols come in folders. The user can very quickly and easily create new picture cards and new folders. Simply tapping on the "Edit"  pencil icon on the top bar. It will turn red when in edit mode. Symbols and folders can easily be copied, moved, and deleted.

It is easy to begin a message with a picture symbol, and then navigate to the keyboard to type a word or two, and then navigate back to the symbols. When your sentence is constructed, just tap the word bar up top, and the sentence will be read in a crisp and clear voice. 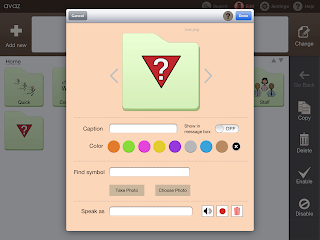 I spent the better part of yesterday not using my vocal-voice, but rather Avaz to communicate with folks, learning as I went.  I was able to walk around my building and create 5 icons of co-workers and place them in a folder named "Staff" effortlessly. I then proceeded to taunt, and banter with those lucky staff members with Avaz, thus proving how quick it was to learn!

Another really nice and seemingly simple feature is the ability to send one's message straight to your Facebook, Twitter, or email account.  On the left, note the message in the top left corner. That was easily sent straight from Avaz!

Other customizable options include the ability to change the number of pictures per screen, change font size, change contrast, color coding, and auto-home.
In addition there is a built in "Backup & Restore" function which links to a DropBox account.  Just one more reason to get a free DropBox account if you don't have one already!

I also really love that there are both adult and child US accented voices, adult male and female British voices, and an Indian female accent, for a total of seven different voices.

So, if you are looking for AAC apps, Avaz for Autism may be just what you need. Currently it is on sale for $79.99 on iTunes, and it is $99.99 on Google Play.  These prices may feel a bit steep compared to other apps, but that's apples to oranges, compare it to some other AAC apps, and it is almost half the price of other popular products.  Or, compare it to dedicated AAC devices with integrated software (some of which sell for $9,000+) and it is a relative steal.

Avaz for Autism is one of the most aesthetically pleasing, intuitive to learn, customizable and effective apps I've seen for our special needs population ever.